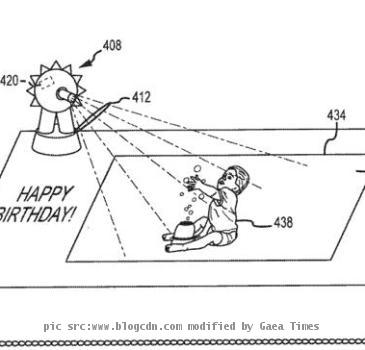 Well you could say that the cake is a lie (blatant Portal Reference) but to say that the new Disney concept is going to be a rage amongst the young ones is nothing but an understatement. The wonderful cake engineers (not sure if that is a career choice but heck) at Disney has decided to come up with a Birthday cake which also stands in for some good old fashion of Augment Reality. Don’t believe me? Read on.

The new patent shows of a cake that has been fitted with a Pico projector to do some digital manipulation of the of pictures to map it on a 3D topography. The patent reads as

The Patent claim also includes a set of illustrations so that people can actually make sense of the unbelievable claims. The picture clearly shows an over sized video camera projecting onto the cake surface in order to facilitate story telling. Disney wants the image to be mapped onto a 3D topography of the cake enabling it to sense. So once the cake is being cut there is going to be some sword fighting or when the cake piece is removed water fills the gap.

The cakes would probably be available exclusively at Disneyland Resorts. So the next time you want to pamper your loved child we strongly recommend that you take make sure that you take up the option if available. They will surely love it.

THIRUVANANTHAPURAM - Animation major Toonz Tuesday announced that it has set up its new production u...

LONDON - Miley Cyrus was spotted in a very public clinch with new boyfriend on her 18th birthday bas...

LONDON - The next time you decide to buy those jazzy cartoon drinking glasses for your kids, better ...

WASHINGTON - While Demi Lovato is taking a break to deal with personal issues, the producers of her ...

NEW YORK - Demi Lovato's reps have denied her dad's claim that she called him from rehab, where the...

Sony is here with a caring touch for the kids. Indeed this unique remote control is sure to be a...
Copyright© 2010 The Gaea Times