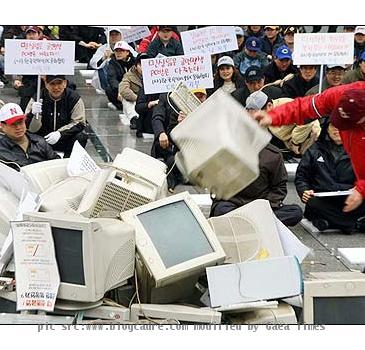 This is definitely not a good time to be a teenager in South Korea. According to South Korea ministry sources the Government is deliberating on the serious Internet addiction problems that faces the average teenager. If the rumors are correct anyone under the age of 16 will be facing a blanket ban on Internet access during the times of midnight and 6 A.M

While such a restriction may seem justified on the wake of some pretty disturbing incidences of crimes arising from this addiction. Horror stories of a couple forgetting to feed their baby in order to raise their virtual child. Cases of violence in the form of murder or suicide after being scolded is not rare either. At this point it would seem that putting the blame on Internet as a medium is a bit reactionary. This is because there are several other cases of demented crimes in the world whose blame may never be put into the Internet.

It is also to be noted that the Korean Student largely stays in his school till midnight. So by banning the Internet effectively all other chances of their access of Internet is gone.

GUANGZHOU - A shocking defensive lapse in the dying minutes of regulation time resulted in a heartbr...

GUANGZHOU - India assured themselves of at least two bronze medals in squash as their men and women ...

SEOUL - North Korea blamed South Korea for starting an exchange of artillery Tuesday across their bo...

BANGALORE - About 60 students from India, Pakistan, Sri Lanka and Nepal will contest in the finals o...

Rebel leader nabbed in Meghalaya, abducted official to be freed

SHILLONG - A top commander of the Meghalaya rebel outfit Garo National Liberation Army (GNLA) has be...