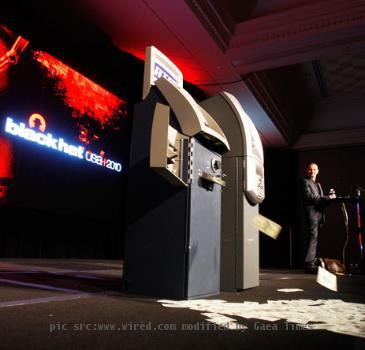 LOS ANGELES (GaeaTimes.com) — If you think money transfer through ATM is safe, think again. With the right software and correct knowledge, it’s actually pretty easy. Barnby Jack, the director of security testing at IOActive, hauled two ATM machine in front of a huge audience in the Black Hat Conference.

Barnby brought a pair of standalone ATM’s -one manufactured by Tranax Technologies and the other by Triton on stage. The vulnerabilities and programming errors which he found out while going through the codings, allowed him complete access to those machines. In one of the attacks, Jack reprogrammed the ATM remotely over a network, without touching the machine; the second attack required him to open the front panel and plug in a USB stick loaded with malware.
After trying his hand over 4 different ATM machines, he said in the conference,

According to him both Tranax and Triton had patched the security vulnerabilities since he brought them to the companies’ attention a year ago. If a customer with an ATM such as a convenience store or a restaurant doesn’t apply the fix, the machines remain vulnerable.

While the whole world is facing continuous threats from hackers all the time, Jack said his aim in demonstrating the hacking techniques is quite educational. He did it to get people’s attention at the security of systems that are presumed to be locked down and impenetrable.

If you are in IT industry for a decade now and have been dreaming of a job in banking sector, th...

Gazza faces Christmas behind bars after failing to appear before court

ISLAMABAD - Millions of flood-hit people across Pakistan, who suffer from loss of shelter, are havin...

MELBOURNE - Is it possible for a call centre staff member to predict how many people would be in a h...

The Reserve Bank of India today released its statutory Report on Trend and Progress of Ban...

LONDON - A Frenchman who allegedly heard Princess Diana's dying words and gave evidence in court as ...

NEW DELHI - Eight people, including five girls, were arrested in the capital for duping more than 50...

MOHALI - Office furniture, computers and files were reduced to ashes in a fire at a HDFC Bank branch...
Copyright© 2010 The Gaea Times