How To Build a Quantum Computer? 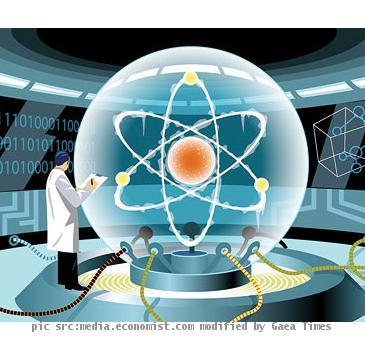 Quantum computing today is quite considered to be the “nirvana state” as far as most technical researches are concerned. The concept is backed up by the underlying theory of Quantum Physics.

What is Quantum Physics?

Quantum physics is a branch of science that deals with discrete, indivisible units of energy called quanta as described by the Quantum Theory. The five main views high-lighted in Quantum Theory are:

When these facts are applied to the world of computing it comes out that, the electrons circling an atom are in multiple states at the same time they only stop when we observe them, which leads to the fact that a quantum bit can hold states of 0 and/or 1 simultaneously. The benefit that is made out of this typical behavior of the electrons is that applying this technology makes complex problems relatively easier to solve. For example, a computer powered by 2.2GHz processor and 2Gb RAM may well take 1,500 years to factorize a 232-digit number where as a quantum computer will compute the same with ease.

The road-map to the construction of Quantum Computer remains protected by the iron-clad theory of Quantum Computing. Let us take a look at what Herb Bernstein, a physicist at Hampshire College has to say about this.

The initial milestone would be the development of an working prototype using a series of controlled optical or electromechnical pulses that work like microwaves. What would be the functionality is that the pulses would take control over the computations and trigger the qubits to aid in the research project, serving as the core processor.

Once the initial experiment has come out to be fruitful enough, the next immediate task would be to go for more qubits. Suppose, the initial prototype model is based on a single qubit then the goal would be to take the scale up to a count of hundred.

3. Construction of a Registry for Quantum Functions

Now, first what is meant by a Registry? Well, Registry serves as a temporary storage for the results of the computations made by the quantum processor during the experiment. Once, the expansion of the qubits turns out to be successful then the next phase would be to provide the system some data space where the data involved in the calculations can be stored for further usage. This will lead the system to somewhat behave like an usual computer we are more acquainted with.

Giving way to complex calculations will lead in huge unmanageable results which would definitely require “massive storage allocation”. But, what would come in as a barrier is that the type of memory that would serve the purpose isn’t quite popularly available. Even solutions like flash storage arrays might as well fail to deliver in this case. As mentioned by Herb Bernstein, holographic memory may be competent enough to provide storage.

5. Dawn of a New Programming Era

The system once successfully established would require a programming language for a person to interact with the system. As it is the programming languages today are compatible to deal with the binary system — that is the outcoming value is either 0 or 1. But, in case of Quantum Computing their would be the added case where 0 and 1 appear simultaneously.

6. Networking and Distribution of Data

Once actively operating, it would become an obvious necessity to share the data over a network for the purpose of further research but that would require a more powerful network than any existent one. Modern fibre channels won’t permit transmissions to be in accordance with the necessities of a quantum computer in terms of speed.

The dark facets that make the implementation of Quantum Computing not just difficult but some-what impossible are:

Filed under: Featured Article, How To, Quantum Computer