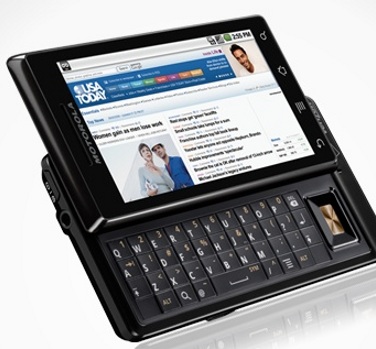 Now, you can buy Android Smartphones from Amazon on special promotion as little as a penny for a new two-year contract. The deal is good for all of Verizon’s U.S. Droid phones, that includes the Droid X and new Droid Pro, through November 22. If you open new account, you will also get a $35 credit to cover the full cost of activation. The offer is applicable only for the new account. If you are ready to upgrade your phone and extend the contract, you can get the Droid X with the current price of $49.99. However, if you are not eligible for the contract, you have to pay $559.99 to Amazon for the Droid X.

Amazon  launched the Smartphone-for-a-penny campaign back in August, when it drastically cut the price of the Samsung Vibrant to 1 cent.  Last week, the site was also selling two Windows 7 phones ie. the HTC Surround and LG Quantum, for 1 cent with a two-year contract from AT&T . The special deal also included some BlackBerry, Android and Palm models.
Some of the interesting features  of Droid phones are the 3.7-inch touchscreen display, full QWERTY keyboard, 1GHz processor, 5-megapixel camera with video recording and Android 2.2 Froyo right out of the box, and it means Flash support is also available on request.

LONDON - Amazon has topped a new list of Britain's most famous brands. The Internet giant even left ...

Biodiversity in Amazon 'over 20mn yrs older than previously thought'

WASHINGTON - A new study has found that the incredible biodiversity of the Amazon region is ov...

Author confident e-book 'Paedophile's Guide' will be back on Amazon

WASHINGTON - The author of e-book 'The Paedophile's Guide to Love and Pleasure' has said that he is ...

WASHINGTON - Consumers have called for online retail giant Amazon to be boycotted for selli...

If you don't like a gift, just swap it online

Amazon wipes up diapers for $540 mn

SAN FRANCISCO - Amazon.com has swooped up the company that owns the website diapers.com for $540 mil...
Copyright© 2010 The Gaea Times