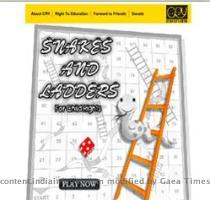 MUMBAI, INDIA (GaeaTimes.com)- The well known NGO, CRY has introduced a new virtual game. The game is one of those ever popular indoor games, snake and ladder, that we grew up playing. It was released last week, to get super popularized in the market within just a few days.

This snake game is just of the campaign strategies to spread the words of the organization. Priya Zutshi, communications manager, CRY said that they wanted to do something different from the “typical preachy and bleeding heart” type of a campaign. Instead they thought of spreading the message in a fun and an interactive manner in the form of the ever popular snake game. The NGO was inspired to launch the game, after the recent statistics revealed that drop out between standard one and eight, are over 1,48,696 in India. Some of these schools do not even have a proper building. Priya Zutshi also said that there is a general tendency of alienating the problems of vulnerable and under privileged children. This game would just give an opportunity to step into their shoes for some time, and think about their problems too. That is why, the game has been so designed, that one positive message will pop up on the screen, whenever the player climbs the ladder, while it would be followed by a negative one, when the player gets bitten by the snake.

Ankita Jain, a player who recently tried the snake game said that the moment she could climb the ladder, she was satisfied with a positive message. However, it also evoked empathy as whenever she was bitten by one. It made her realize how lucky she is, and yet, not every one is as lucky as she is.

WASHINGTON - Scientists have discovered that some species of snake can stay airborne for up to 79 fe...

Snake In The Jungle Coloring

Snake in the jungle coloring Game....

PURULIA - A 12 foot-long python has been retrieved from Barundih village in West Bengal's Purul...

Play the classic snake game on your mobile phone! This version is set in the dark. The snake has a l...

LONDON - Scientists are analysing fossils of a 200 million-year-old reptile of the late Trias...

Where is the nearest Dalit village?

PATNA - So long as this question is asked in India, there is no India shining, India emerging, or as...

ALWAR - Environment and Forests Minister Jairam Ramesh Wednesday did not rule out the possibility of...
Copyright© 2010 The Gaea Times