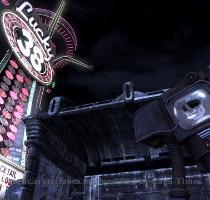 LOS ANGELES, (GaeaTimes.com)- After “Fallout 3″, Obsidian Entertainment introduced its new sequel “Fallout: New Vegas”. “Fallout 3″ that was introduced three years back, could successfully create a rave in the world of video gaming. Its sequel however promises a lot more excitement flexibility and depth.

One should not expect much similarities between “Fallout: New Vegas” and its preceding “Fallout 3″. There is very little narrative connections between the two games, with a lot of virtual differences. The last game was located in DC, while this one is centered around Nevada. The last one started with the birth of your virtual character, and it acquired its characteristics as he grew up. This game starts with your already grown up character being shot on his head, leading to his memory loss and psychological turbulences. Its character is designed through certain psychological tests like the ink blot and word association tests.

The game begins when your character is shot on his head by an unknown villain, while you try to deliver a package of simple poker chip to the New Vegas strip. Although you are saved by a suspect robot, you go through some mental turbulences, and try to find out the villain who tried to murder you, so that you can deliver the package on time. Not only the theme, but also the designing of “Fallout: New Vegas” is quite exciting with good sound effects and props like big melee weapons, point blank head-shots. The video game voicing has been done by William Sadler, Kris Kristofferson, Matthew Perry, and narrated by Ron Perlman. The game will be available for PC, PS3 and Xbox 360. Although the overall designing of the game is excellent, its finishing has been hampered due to certain technical issues, says a source.