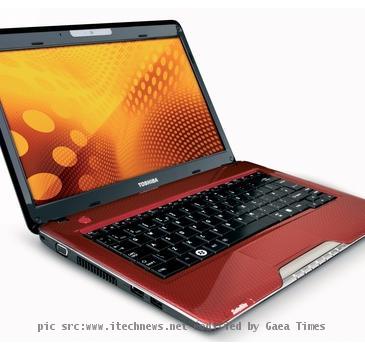 SYDNEY, AUSTRALIA (GaeaTimes.com)- The latest laptop recall by Japanese electronics giant Toshiba has sent waves in the IT sector and almost 41000 models are being recalled worldwide by the company. The company has received several complaints from the users of its notebooks in Canada and USA. The overheating problem experienced in three of its popular models has prompted the company to issue the recall. All the models recalled by Toshiba belong to the Satellite range. While the company has got only 14 instances of complaint from the users in Canada in USA it has got 129 complaints from the users. The laptop models are reportedly getting excessively heated near the AC adapter point. The laptop parts may melt in such cases and some of the users have already complained of getting burns from overheated laptops.

Toshiba has stated that the overheating problem can also be solved by getting a BIOS update which can be found in its country based websites. The Canadian users may check the Toshiba Canada website to determine if their models are affected by this recall or not. What has come as a boon for the company the Australian users have not complained of overheating so far. The Toshiba recall follows close on the heels of Sony Vaio and HP battery recall.

Toshiba laptop recall however is not going to have an impact on the sales as the company thinks. It is of the opinion that its global sales will touch 100 million units in 2010 the recall notwithstanding. The customers in Australia have been advised to see the Toshiba Australia site for details.

Toshiba has launched the Satellite L630, a sleek and portable laptop for young users. Its excell...

Top and Best Most Popular Gadgets 2010

Gadgets have flooded the markets this year like never before. Another eventful year is shortly t...

LONDON - Scientists have invented a gadget that allows viewers to watch 3D videos without special gl...

LONDON - Technology majors are going eco-friendly, and it is finally changing what they produce. ...

Nowadays a laptop has become a necessary tool for learning and a laptop is a must for every stud...

WASHINGTON - As part of his efforts to highlight the importance of science, math and engineering amo...