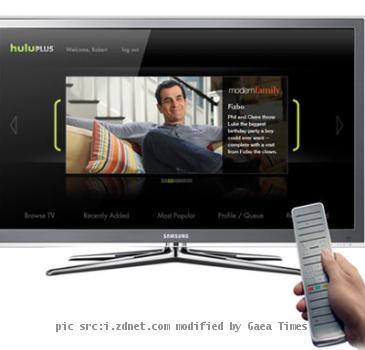 SAN FRANCISCO (GaeaTimes.com)- With the new Hulu Plus service unveiled, the latest HD LED TV and Blu ray players will be able to stream HD quality web TV content on their home TV sets. It is now available for under $10 a month. The HDTVs that can connect to the web will be able to access this service and play back the content that is being offered in 720p HD content. The god thing is that the service is not only limited to the HDTVs but the computers and laptops owners can also avail it. Besides it also supports streaming on iPad and iPhone. In near future a number of other devices will also be supported. Those who are interested can see the Hulu site to get a subscription. The service offers content from a number of popular TV network providers like Fox, NBC and ABC. As a result, the viewers can get access to their favorite TV series at the click of a mouse.

Hulu is owned by NBC Universal as well as The Walt Disney Company. The owners of newly released Samsung Connected HD devices will be able to get the Hulu Plus service. The advantage of the new service is that the supported device users can use either Wi Fi or 3G network to access this. The service accessed thorough 3G will be obviously better and suffer no loss in quality.

Hulu Plus is also going to be made available for the Sony PS 3 owners. Even the owners of Xbox 360 will get it next year onwards. Whether it can withstand the competition from Netflix is another question.