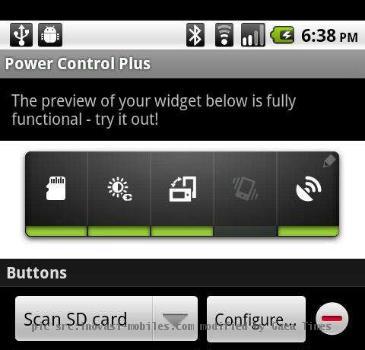 If you are the kind of the person who would like have control over everything on your home screen we would have to recommend the Power Widget Plus. This is quite a tool for the control freak Android user in You.

The widget adds many user settings right on your home screen like Wi-Fi, brightness, Bluetooth, but also adds things like a battery indicator, LED flashlight, haptic feedback, tethering, and even input method. The input method enables the user to change the keyboard with just a tap. The widget may be arranged as per the user’s convenience.

The Power Control widget fan will feel right at home with this nifty tool. The list of compatible settings are

ISLAMABAD - Despite stiff opposition from allied parties and the opposition, the Pakistan government...

LUCKNOW - The National Democratic Alliance (NDA) would return to power in Bihar, and the Congress' s...

NEW DELHI - The Dalai Lama, the spiritual leader of six millions Tibetans and a global icon of peace...

India a nation of immense power and presence: UAE daily

ABU DHABI - Calling upon members of the Abu Dhabi Chamber of Commerce and Industry to develop joint ...

MUMBAI - A benchmark index of Indian equities market, which plummeted over 600 points in afternoon t...

NEW DELHI - Encouraged by the recovery of the art market after a slowdown of 30 months, a leading Ba...
Copyright© 2010 The Gaea Times