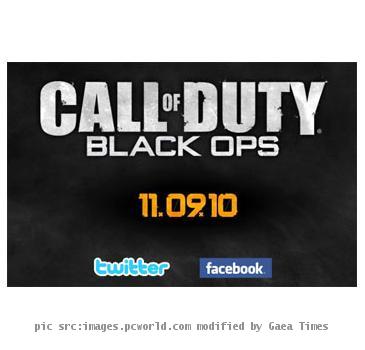 SAN FRANCISCO (GaeaTimes.com)- The lovers of FPS games that promise adrenaline rush and unending excitement have one or more editions of the popular game franchisee Call of Duty in their collection. Starting from the year 2003, the game franchise has offered the gamers exciting and enthralling FPS games and each release has been accepted by the gamers’ community with accolades. The latest game in the franchisee is going to be released in November 2010. The information has leaked out on the web and a trailer of the upcoming game has spread like wildfire. The site of the new game has been released by Activision. The new game will be named Call of Duty: Black Ops, as the trailer suggests. It is actually the 7th game in the successful FPS series.

The site that has revealed the first looks of the game Call of Duty: Black Ops is still under development and there is no screenshot or wallpaper available for download as of now. However, within a short time it will be loaded with more goodies. The developers of the game, Treyarch has not specified whether it will be released only for PC or will have versions for gaming consoles like Wii and PS3. However, since the earlier release of the franchisee named Call of Duty: World at War got a multi-platform release, chances are there that the trend will be repeated for this game as well.

The game Call of Duty: Black Ops is likely to have mind blowing graphics and immersive sound and the system requirements are also supposed to be on the higher side. The game has locations like Cuban and Vietnamese forests in it.