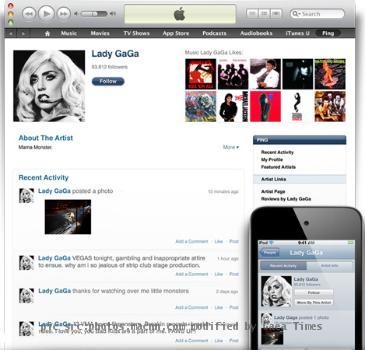 CUPERTINO (GaeaTimes.com)- Yesterday the Cupertino based electronics giant Apple unveiled its newest version of media player and management software iTunes at the mega music launch event. iTunes 10 is being hailed by the company as a major upgrade to its music and media management application that will enhance the media experience of the users. Steve Jobs the CEO of Apple highlighted the new features in the software at the event that was attended by the major media entities. With this version Apple has jumped in to the social networking bandwagon. There is a social networking service in built named Ping. Like similar social networking services the iTunes users can create community of buddies using this service and keep track of music their friends are buying and downloading through iTunes.

The iPhone and iPod touch owners will also be able to access this service via the iTunes Store app as it has been reported. The application can be downloaded for free from the Apple site or iTunes store. As was the case with the earlier versions booth Windows and Macintosh users can use the application without any issue. The users in USA will also be able to rent movies as well as TV shows through the application but it seems that the UK users will have to wait. iTunes 10 has a sleeker interface now.

iTunes 10 will have to complete with Windows Media player 12 which is really a very competent media player and supports many of the features present in Apple’s application. However, this version supports better syncing and an intuitive interface.