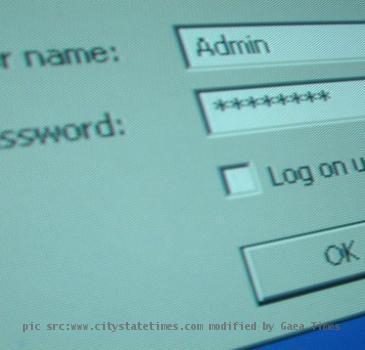 LOS ANGELES (GaeaTimes)- There are a good bunch people who are getting more and more net savvy. The internet could be referred to as the center of technologies these days. If a person does not have the internet connection, then he or she is thought to be living in the Stone Age. Roughly, everything people have on the internet is protected by password and is considered safe. Imagine the situation when you find that all your personal information has appeared on the net even after you have kept it secured with a password. Last week, a leading media outlet pointed out the dangers linked to using the most common passwords on various websites by several internet users.

Last week, a few cyber criminals hacked an American blogging network. These hackers went on to circulate the account details of about 1.4 million people. The hackers have tried hacking people’s accounts on different websites as well. This was feasible since a good number of people use the same username and password for different websites. Gnosis is the name of an organization that is being presumed to be behind the weekend attack. The majority of people do not seem to be very conscious at the time of selecting passwords. Most of them select a password that is easy to remember. After the hacking, as the user passwords were published on the internet, the most common password became known.

Nearly 200,000 people had their passwords hacked. ‘123456′ was on top of the list of the most commonly used passwords. The next one was the term ‘password’. Hacking of accounts can easily be warded off by avoiding the use of most common passwords.

LONDON - A study has suggested that Internet chatrooms and social networking sites are to be blamed ...

WASHINGTON - A new study has pointed out that infants are more efficient at digesting milk than adul...

WASHINGTON - A new study has suggested that late-preterm babies, those born between 34 and 36 weeks,...
Copyright© 2010 The Gaea Times