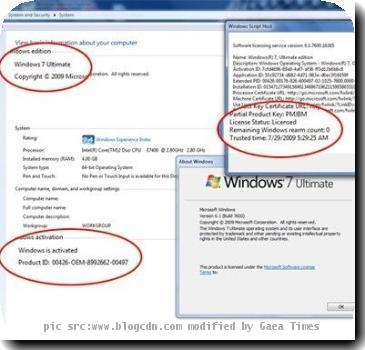 Less than a month after the release, Windows 7 has been cracked by Chinese hackers. They have managed to crack the product activation system of the new Microsoft operating system.

Meanwhile, Microsoft representative has asked the customers to use only the genuine software, alerting that the fake one may be malware affected.

There are two applications namely Dubbed RemoveWAT and Chew-WGA, that exploits several flaws of Windows 7. These applications allow user to overlook Windows Genuine Advantage(WGA) registration procedure. With these applications one can use Microsoft’s newest operating system without having a license or legal copy of the version.

Reason behind the Crack

Fortify’s European director, Richard Kirk cited a probable cause of Windows 7 being cracked. According to him, the millions of lines of program code that go into a modern operating system, makes it extremely difficult to ensure security.

The Steps Microsoft has taken to fix the Cracks

Each time crack is identified with their product, Microsoft has took initiatives to block them.

With each new solutions provided by Microsoft to block the crack, a no of advanced cracks applications are appearing.
Trojanized versions of RemoveWAT and Chew-WGA soon will be available on websites and file-sharing networks near you

This is really threatening. Microsoft should take some serious steps to overcome this problem which may severely affect their business in future.

WELLINGTON - Families of 29 men trapped underground after an explosion in a New Zealand coal mine fa...
Copyright© 2010 The Gaea Times