Twitter has just released the top Twitter trends of 2009 with Iranian elections topping the list. With the increasing popularity Twitter boasts of more than 3 million updates per day. The flooding of Twitter streams has made it a herculean task to sieve the signals from noises and follow the trend. There are various tools to track the trends across Twitter and other social networks. Now the question is, which tools give you the best results. Given the Twitter Search, there are a number of other tools to pick the best from Twitter streams. After a thorough groundwork we assorted a list of top 10 Twitter trends/statistics tools. 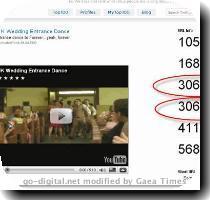 It tracks popular urls tracker on Twitter. Twitturly features a Digg like interface displaying the 100 most popular urls shared on Twitter in the last 24 hours. Each time a user shares a link, it is counted as a vote for a particular web content. This could be a handy tool for those talking about Twitterville and look for the number of tweets that has the link. What’s more it shows the of tweets in last 24 hours, 1 week and 1month. Twitturly also estimates the total reach of the tweets

This is an effective tool to track how often a keyword or phrase appears in Twitter trends. This allows you to search for at least five trendy keywords at once. To measure the reach of your tweet just enter a keyword or phrase unique to the tweet. Suppose you enter the name of your company and any competitor,  TweetVolume would show which one is generating better Twitter buzz.

It’s a web application that analyzes the Twitter sentiments based on the conversations on Twitter. Thummit Quickrate tracks and lists the latest buzzwords in trend like actors, movies, brands, products, etc. It shows the popular topics, recent topics and latest updates. It combines them with conversation from Twitter. Based on the sentiments analysis a Twitter update is given Thumms up(positive) or Thumms down (negative) or neutral. Click on any topic to display the opinions on the topic found on Twitter. People can also vote on topics via mobile phones.

When it comes to tracking the hottest twitter trends on particular topics or people. It displays an in graph form and comes handy when you are mining data for particular projects.  Suppose a Twitterer is talking about a topic you know about, you might just provide an in to make an introduction.

Resembling a search engine, this Twitter tool offers a simple stats of tweet types and its exposure (reach to others). That allows you to track who found your Tweet of interest and retweeted it. For instance, if you search for Facebook privacy changes. What’s most interesting - it shows the number of many times your tweet was seen, clicked through and who had the greatest reach in disturbing your tweet. That could be an interesting stuff to track who in your network likes a certain topic and is able to distribute the tweet widely.

This Twitter tool offers the stats of any user including their a average tweets per day over time. It is useful for revealing the tweeting behavior of any Twitter user. It calculates the Twitter activity data and presents them in colorful graphs. It’s Tweet Timeline is an interesting feature, as it shows month-by-month total tweets since your joined Twitter.  Some of the other metrics shown by Tweetstats include

Additionally, the Tweet Cloud allows you to see the popular words you used in your tweets.

What’s popular in Twitter, Del.icio.us Lifehacker, TMZ, YouTube, Mashable, WikiHow, CNN, New York Times, Viddler, Amazon.com, blogs, and Digg? You can get all of it right on this site.

With retweetist you can see the hottest retweeted links. It enables you to click directly to the referred website.