Opera to Add Powerful Features in the Upcoming Version 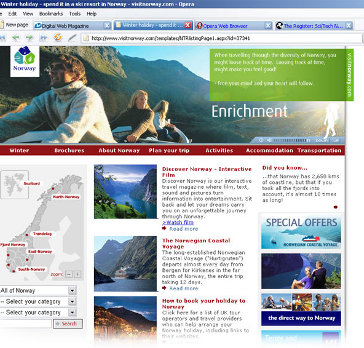 The Web Browser company Opera announced some of the interesting features before the release of the upcoming version, Opera 11 Alpha at its recently held conference in Oslo. The key feature of the new version is the the ability to customize the application.  Opera 11 will support extensions, apart from the widgets that the current version already supports. Firefox and Chrome already allows users to add their extensions.  Opera 11 will allow several extensions with its new browser.  You may come across a new new terminology while browsing the web and then you can search the Wikipedia extension for that.  If you like to know how many people read the article that you are currently reading, you can use Reddit extension.  Similarly, there are other extensions for Facebook, YouTube etc.

According to Christen Krogh–Chief Development Officer, Opera Software says the success of a company depends upon the feedback from the customers. CIOL blog reported that instead of using images, the complete browser has been designed using a wireframe model, so that it can be rendered in real-time. Additionally, it has been provided support for OpenGL and OpenGL-ES, so that any smartphone and its  hardware platform that supports these two graphics libraries, would be able to render the web browser. This will increase the browser performance.  Also, because of rendering, it will be easier to fit the browser in the smartphone screen.

According to the blog, the other core feature includes pinch to zoom feature in all smartphones that support it. Pinch and zoom feature will improve the performance of different graphics apps  and the new feature will also seamlessly zoom a web page the the user is currently browsing.  When you zoom into a particular part of a web page to read the text, the text will be redrawn right away. Soon Opera will be  releasing a beta of Opera Mobile for Android phones and a new version of Opera Mini for iPhone.  Christian continued that the browser version will be available in future for other devices like TV screen.