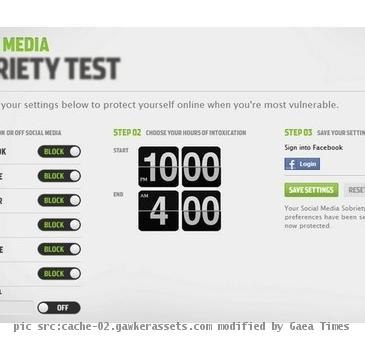 Out of all the Useless Firefox and Chrome plug in extensions this app may be by far the most clever. Well for one this app will monitor your Sobriety level and prevent you from visiting Facebook and Twitter so that you will not be able to post mostly embarrassing updates like calling it quits with your girlfriend on your wife’s wall.

Social Media Sobriety Test locks down your social networks including Facebook, MySpace, Twitter, Flickr, YouTube, and Tumblr, as well as a custom URL should you fail the test. Similar to Google Lab’s Mail Google which locks down social networks based on the performance of a simple maths test. In this case a field Sobriety test and questions like which side of the screen is blinking on a puzzle when you attempt to log in the sites between the cutoff hour. The app in itself is ingenious and great marketing for its maker Webroot.

Well go ahead tell us did you ever had a Facebook gaffe when you actually wished there was a app like this? Feel free to share with us