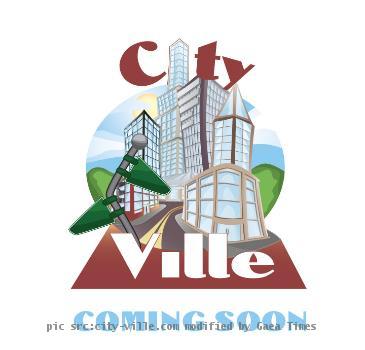 With the immense success of Farmville, Zynga has decided to gift the urban users with their all new feature CityVille. Unlike Farmville you wont have to feed chickens, plough your lands and raise barns.

As it happens, FarmVille holds the top spot for Facebook applications, with over 50 million users. Altogether, the company claims over 225 million users for its games.

CityVille is where Monopoly meets Main Street, Instead of harvesting crops you’re harvesting your neighborhood, instead of clearing your friend’s frontier you’re working on a friend’s franchise.

The awe-inspiring fact is that CityVille also features the company’s first 3D-rendered buildings and characters. It is expected that though the game interface might differ but the underlying functionality won’t go for a radical change thus there won’t be much usability issues.

This installment from Zynga will be quite similar to the much acclaimed Sim City where players have to consider their citizens’ needs, from roads and housing to post offices and restaurants. Infact, players don’t exactly escape agriculture entirely, there lies the need to plant and harvest crops as well as import goods from overseas.

The game is supposed to be free and as usual you would have the liberty to make transactions with FB cash. The Beta version of the game awaits its release real soon after the developers are done with the formalities.

With the immense success of Farmville, Zynga has decided to gift the urban users with their all ...
Copyright© 2010 The Gaea Times