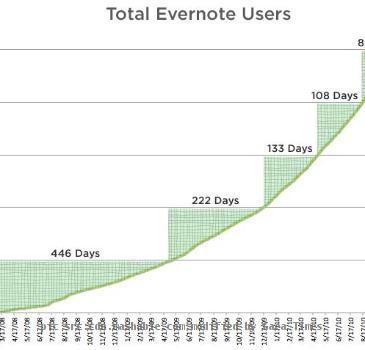 NEW YORK (GaeaTimes.com) — Ever since Evernote has released its wide range of apps supporting nearly every desktop and mobile platform it has continued a steep uprise in the number of its users. Today, it is celebrating 5 Million users Worldwide. The recording fact in its growth signifies the last 83 days within which it added 1 lac users to reach the 5 million figure.

The record for this startup point to 22,130 new Evernote users in a single day which is around 10,000 new users as compared to normal growth. Evernote offers some interesting note taking features which include snapshots and audio notes making this app a necessary presence on most iPhone and Android handsets. Moreover, syncing of these notes from your mobile to your desktop and over the web has made it a relatively attractive app for users.

Evernote has raised around $ 20 million in funding. Gradually as this company signifies its presence it is expected that more people will continue to use their paid services which is a good revenue source for the company. If you have not used Evernote yet, try it out. I’m quite sure that you’ll take it up as your only note taking application.

There is a rumor that HP is going to get rid of its Windows 7 based tablet in favor of PalmOS based...

In case you are developing an app for Apple's app store that would require users registration fo...

Top 10 Most Essential iPhone Apps for your Daily Life

iPhone is not just a luxury now, it has grown into our daily life. Loaded with apps, iPhone have tak...

Review: Evernote tops Yahoo for online note-takingNEW YORK — Like many people, I often find myself...

Evernote was right on top of our list of top 10 newest free iPhone apps. This app is now a hotshot a...

Free iPhone Apps are now available aplenty. Many of those apps either have no use or have bugs that ...