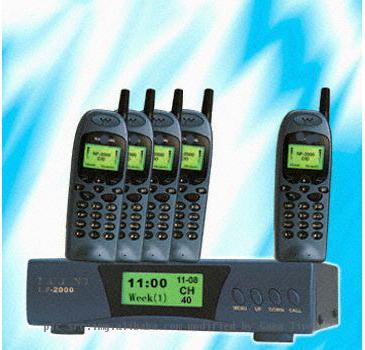 PBX (Private Branch Exchange) is a small telephone switch that is used to establish connections among the internal telephones of a private organization. PBX reduces the overall cost of telephony in a company by reducing the total number of telephone lines they need to lease from the telephone company. Without a PBX a company needs to lease one telephone line for every employee with a telephone. The company only needs to lease as many lines from the telephone company as the telephone company as maximum number of employees that will be making outside calls at one time. It is nearly 10% of the number of extensions. In a PBX system, every telephone is wired to the PBX. When an employee takes the receiver off hook and dials the outside access code, the PBX connects the employee to an outside line. The enterprise-class PBX including directory-based voicemail, conference calling, integrated messaging, interactive voice response (IVR), three-way calling, caller ID, and call queues.  These packages are provided at no cost and enjoy support from users who provide product support. We have top 10 open source PBX software.

Asterisk performs all the functions of a traditional telephone system and much more. Essentially it is an open source PBX system. It includes a host of features such as voicemail and call conferencing. With Asterisk software telephony hardware and a common PC, anyone can replace an existing switch or complement a PBX by adding VoiceOverIP, voicemail, conferencing and several other capabilities. The PBX systems integrates with analog phones and most standards-based IP telephone handsets and software.

Asterix not only reduces the cost of traditional telecommunication technology and operation it also moves the voice over IP, VoIP, to the mainstream. Asterisk integrates pre-existing analog telephone network with the benefit of IP technology, reduce costs.

sipX is an open source voice over IP PBX software.  The main features of sipX is software implementation of the Session Initiation Protocol(SIP) that makes an IP based communication system (IP PBX). The design of sipX deviates from the traditional Asterisk. sipX includes features such as voice mail, interactive voice response systems, auto attendants and the like.  It looks like Asterisk isn’t the only open source PBX game in town anymore. sipX, as the name implies, is a SIP-only PBX project released under the LGPL. A noteworthy feature is the inclusion of an out-of-the-box

This is an open source Unified Communications Server software that is offered with IP PBX, email, faxing and collaboration functionality. The Web interface includes capabilities such as Call Center software with predictive dialing. Elastix integrates several software packages each including their own set of features. Elastix adds new interface for controlling and reporting. Elsastix offers Call recording, Voicemail and Voicemail-to-Email functionality, flexible IVR configurable by web interface, voice synthesis support, extension batch tool to generate large number of extensions using CSV files, integrated Echo Canceller. Phone provisioner, configurable via a web interface. It allows configuration of a large number of IP phones in a short time for supported phones.   It features a web interface and includes capabilities such as call center software with predictive dialing. The Elastix functionality is based on open source projects and offers PBX, fax, instant messaging and email functions.

FreeSwitch is a scalable open source cross-platform telephony platform designed to route and interconnect popular communication protocols using audio, video, text or any other form of media.  FreeSWITCH offers support to various stable telephony platform on which many telephony applications can be developed using a wide range of free tools. It was originally designed and implemented by focus on several design goals including modularity, cross-platform support, scalability and stability. FreeSWITCH offers many advanced SIP features such as presence/BLF/SLA as well as TCP TLS and sRTP. It can also be used as a transparent proxy with and without media in the path to act as a SBC (session border controller) and proxy T.38 and other end to end protocols.
Link

This is a free Windows-based open source PBX, IVR and Auto-Attendant Phone System built on .NET. It is a commercially available product, but is now being put into Open Source. CallButler features Text to Speech, Find Me/Follow Me, Call Forwarding/Transfer, Call Recording, Conferencing, Call Personalization and Unified Messaging, CRM/SFA/ERP/Database Integration.

VoicePulse for Business offers PBX installer and reseller channel for commercial businesses and wholesalers. The VoicePulse services are compatible with PBX clients like Digium’s Asterisk, AsteriskNow, Switchvox, Fonality’s PBXtra, trixbox, PBX-in-a-Flash, FreePBX, or FreeSwitch. It is a Asterisk-based systems that allow users to instantly activate new numbers, have active fail overs protection for numbers individually and view inventory of numbers.

CoreDial’s VoiceAxis 3.0 software platform offers Service Providers and Interconnects to sell, provision, manage and invoice hosted PBX, VoIP, SIP trunking and related services for business and residential customers. This turnkey package is a software package targeted to enterprise-level business and service providers. The open source PBX software has been designed for the  management, billing and provisioning of hosted PBX. It’s a one stop management tool that Asterik users can take to, for its ease of use. VoiceAxis management software can be used by medium to large enterprises to implement a cost effective feature rich, scalable Asterisk PBX solution.

Digium is a creator of Asterisk, which makes the platform available in a variety of ways both as a free code and as a value-added telephony and platform packages for businesses. The company is seeing the most traction with Switchvox. Its major products are IP PBXes geared for SMBs. The Switchvox, SMB 4.5 adds phone feature packs that brings functions such as call recording and visual voice mail directly to compatible handsets as opposed to being available only from the web. They were in previous Switchvox additions.

This open source PBX is the business version of its IP-PBX software trixbox. The Pro Pro Standard Edition (SE), Enteprise Edition (EE), Call Center Edition (CCE) and Unified Agent Edition (UAE). Fonality uses what it calls a hybrid-hosted architecture - a split, hosted plus premise model. It includes free VoIP calling and monitoring like most traditional solutions to provide. It also offers the PSTN connectivity and call privacy that you’d like to find in more traditional PSTN set-up.  Fonality uses the Asterisk-based PBXtra