‘20 Things I Learned About Browsers and the Web’ From Google 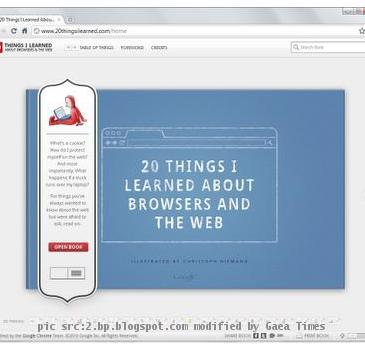 Google’s attempt to spread browsers and the web literacy among the average people has paved way for a short book ‘20 Things I Learned About Browsers and the Web’ , Google has released this interactive online book explaining concepts like, TCP/IP, HTML, browser extensions and malware.

Well this book contains step-by-step explanation of the web and its basic functionality. The book has been doctrined by the Google Chrome team using HTML5, not only this the book also features a lot of clever illustrations by award-winning German illustrator and children’s author Christoph Niemann.

Among the 19 different topics plus a recap, making for 20 things that the book focuses on, the major major discussions regard:

The apparent picture that opines on a belief that most people know what the web is was nullified by Google was they hit the streets with the question “What is a browser?”. After the poll was conducted an awe-inspiring less than 8% of the people came up with the correct answer. This lead the mammoth to come up with the idea of spreading the word among the mass.

This indeed has been a noble approach from Google and is supposed to aid in social and moral development. What do you think?