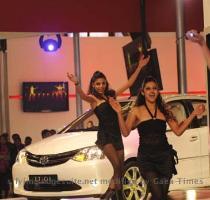 NEW DELHI, INDIA (GaeaTimes.com)- Toyota is all set to launch its much awaited entry level sedan ‘Etios‘ on December 1 this year. The car has received a great amount of hype as some experts felt that it will be in direct competition to Maruti’s Swift Dzire and even Honda City. Reports indicate that the car will be launched with a petrol engine only but later the company is planning to launch the diesel model as well. There are also talks of launching a hatchback of the car but the company has not yet revealed details of the project.

Toyota has also expressed high expectations from Etios and plans to set up its second manufacturing facility in India soon. The company has estimated more than 60,000 units to be sold in the first year of the car’s launch. The Toyota Etios received great reviews from the car experts earlier this year when it was showcased at the Delhi Auto Expo 2010. The car will be priced at Rs 5.25 lakhs and will also boast of a 1500cc engine.

Many have called the Toyota Etios the most ambitious project from Toyota yet. It has reportedly invested Rs 3200 crore on the establishment of the second plant near Bangalore. The plant will have an annual capacity of 70,000 which can expand to 200,000 if Etios turns out to be a hit in the Indian market. Toyota enjoys a strong presence in the markets of the segments that it has launched in India. The luxury SUV Innova has been one of the most successful in its segment in recent years.