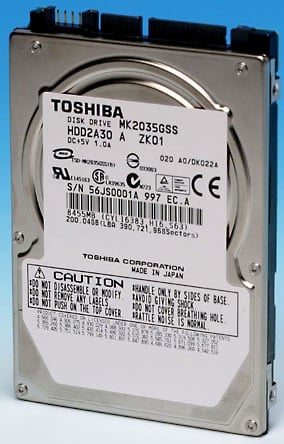 Toshiba has claimed a first with its MK2035GSS 2.5in notebook hard drive which uses perpendicular recording technology to achieve a massive 200GB of storage.

It can withstand 325g operating shock and 850g non-operating shock. It has a 4,200rpm spin speed, a SATA II interface, 8MB of cache and an average seek time of 12ms.

It should be available in August. Now that is a harddrive I am looking forward to buy.

10 injured as ceiling of building under construction collapses

LUCKNOW - At least 10 labourers were critically injured when a major portion of the ceiling of an un...

WASHINGTON - A new study has found that low amounts of albumin in the urine strongly predict faster ...

It's impossible to take a bad shot of Johnny Depp: Photog

NEW YORK - Legendary photographer Albert Watson has said that it is impossible to take a bad picture...

LOS ANGELES (GaeaTimes.com)- Recently the world got to hear one key confession of Mark Wah...

AGARTALA - As many as 650,000 people in Tripura will be vaccinated against Hepatitis B by March next...
Copyright© 2010 The Gaea Times