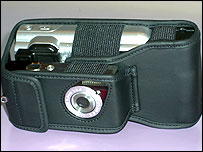 K-NFB - a portable scanning device, invented by Raymond Kurzweil, that reads text to visually impaired people will go on sale in the UK next month.

The K-NFB, which combines a PDA and a digital camera, means that people will be able to read menus, train timetables and product labels in shops.

K-NFB costs £2,625 which is substantially costlier than a PDA and a five-megapixel digital camera.

“This has probably taken something like three years’ effort by some fairly diligent scientists,” explained Mervin Robertson, managing director of Sight & Sound Technology, who will be selling the device in the UK.

“Effectively, it’s a software cost that makes up the vast majority of this.”

The K-NFB gives the user an initial “situation report”, describing what it can see. The user then makes a decision about whether to take a picture.

After a few seconds to process the image, the contents of the document are read aloud.