Facebook has been at center of criticism for privacy issues.  An anonymous writer at blockzuck.com revealed an interesting loophole in Facebook. Until recently he was surprised to discover that Facebook CEO,Mark Zuckerberg could not be blocked. When you try to block Zuck, you will see an error message - General Block filed error: Block failed.  He is the only person who is immuned from being blocked by users on Facebook.

Overall it doesn’t sound so interesting as most of the users on Facebook might never step up to block the founder of the site for no big reason. Gawker media clears up the cloud over the story. The guy from Blockzuck.com clarified in an email that he was on a campaign instructing people to block Mark Zuckerberg on Facebook. This was to protest against the major privacy uproar. He posted the steps to block Mark Zuckerberg in his site.  However, once he found that Zuck was unblockable he had to update his site. 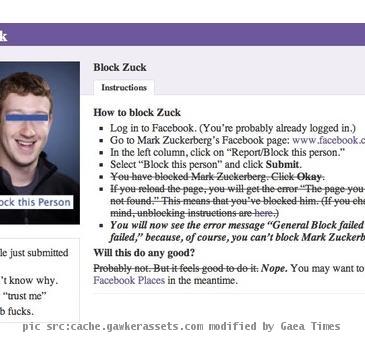 This might well be a case of absolute power corrupts absolute. Inevitably a responsible social netwoking media with over 500 million users should never corrupt its privacy features for any exceptional personality be it the President of U.S, Barack Obama or the CEO and founder of the site Mark Zuckerberg.

ALLAHABAD - Environmentalists completed a 25-days long voyage from Yamunotri glacier in the Himalay...

NEW DELHI - Calling for caution after anonymous letters with communal overtones were distributed on ...