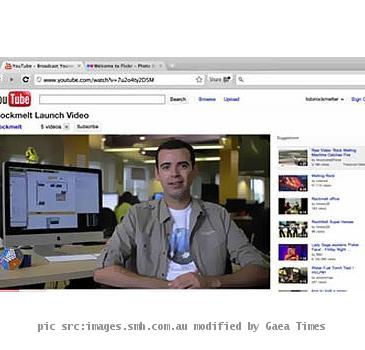 SAN FRANCISCO (GaeaTimes.com)- There is no denying the fact that the world wide web which has changed the way people live and communicate is itself changing fast. Therefore, the need for a browser that let people do their on line activities easier and better has become evident. It is true that there are a lot of browsers out there that are pretty much capable of everything a user needs but Rockmelt promises to be a browser with a difference. It is meant for the social networking addicts. The beta of the browser has come out in recent times and it has generated a buzz in the tech communities. The browser is built on the theory that the majority of the web users spend most of their times in social networking sites and searching for information.

The Rockmelt browser eliminates the need to roam from one site to another frequently by offering updates and information from some sites in its interface and side panes. The browser requires the users to have a Facebook account but the way Facebook userbase is increasing there will be no dearth of users for the new browser. The interface is clutter free and since it is modeled on the chromium core the speed is on the faster side.

It is difficult to say how far Rockmelt will click with the users. Despite stiff competition from rivals Microsoft’s Internet Explorer still holds the numero uno spot among browsers, followed by Firefox. Opera and Chrome also has a loyal user base. There are some glitches in its beta version as well but they will be fixed in the final release.

LONDON - A new internet browser that requires a Facebook log-in has been unveiled, aimed squarely a...
Copyright© 2010 The Gaea Times