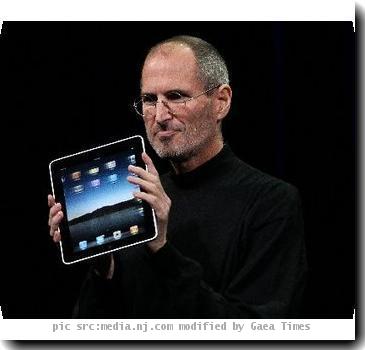 There are loud talks in this Grammy - Stephen Colbert has an iPad. Does it make any difference to his talent. The political satirist had a point to contemplate, when he said what kind of pocket did that come out of. This sounded like a chaffing on the Cupertino men who had always boasted about their near-perfect creations. But this time they landed on the wrong Foot. Apple’s iPad could do what Vista did for Microsoft. With an unprecedented hype and rumors, Apple’s tabled seemed to be something close to the gadget of the millennium.  But, then you don’t need to buy a gadget only because it has Steve Jobs associated with it.  We decided to pick out the top 10 reasons to hate Apple iPad.

1. Based on the OS of iPhone

At the first glimpse it appears that iPad is a stretched version of iPhone.  However, the OS and interface is the same. What’s the big deal in using the same phone features in a bigger device. What irks most is that you have drag-and-drop feature.

Steve Jobs was proud to announce his cheap laptop that he called iPad. But even a netbook allows you to run your browser, a Word Document and media player simultaneously.  So it high time for Mr. Steve’s to define a new breed of laptops that satisfies most of the smartphone characteristics and some of the netbooks features.

3. Reading books on the iPad

The web’s abuzz with rumors that iPad is a Kindle killer. With hands on experience, your eyes would not tolerate iPad for more than 2 hours. You are most likely to suffer a headache. To know more you can go through a lively conversation between Apple iPad and Amazon Kindle.

This is a big crime. Typing on a touchscreen might sound nice, but the hassles are only known to the people who have used it. Just a misplaced tap on the key and an unwanted typo. Without a keyboard its difficult to manage. How many people require big screen portable computing without real keyboard. The keyboards on netbooks protect the screen.

The most annoying feature that no gamer would ever tolerate. It’s somewhat Apple’s concept netbook that won’t show up most of the cool flash stuff in a websites. Adobe Flash team and Apple team need to work with Adobe flash team to offer flash support for flash-based-apps in the iPhone.

Who on earth needs a stretched iPhone without a camera. Gosh! you can’t use Skype.   We could suggest a front-facing camera might have done.

By now you must have know that you can’t just plug in your digital camera with iPad to download pictures. Now what you need to know is that you’ll actually have buy a $30 adapter that Apple will be selling. That’s a tough bargain to handle.

iPad flaunts a huge screen with more than decent void space. What about widgets to fill the space, say calculator, sticky notes or anything else.

9. One and Only Network

Apple decision to stick to AT&T is no way a right move. Customers could have found better options in T-Mobile and everybody would have been happy. Apple doesn’t seem to care about people.

The claim for upto 10 hours  battery life doesn’t sound real. With the Wi Fi or 3G turned on we might need to change it twice a day. For more, play a game on your iPad for an hour, do a little bit of web browsing for 2 hours, and your battery is dead.

The question remains, with loads of netbooks available in the market bundled with keyboards, flash support and multitasking, why would one go for that feel good touch experience by Apple. Before you decide to buy an iPad you could take fuehrer’s noble opinion.