Firesheep Extension A Boon For Hackers! 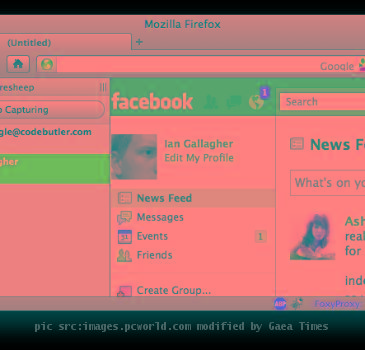 SAN FRANCISCO (GaeaTimes.com)- There is a good news for those aspiring hackers who have always dreamt about getting access to the email or social network account of others. There is a new extension of Mozilla Firefox on the horizon that claims to enable the users to hack into others accounts using an open Wi Fi network. It is named Firesheep and since it has been made available online more than 100000 persons have downloaded it. The Facebook and Twitter users are at risk from this extension and it targets a total of 26 websites. The fear of the security experts regarding this plug in is exactly not unfounded. Those who have attempted using the extension to hack into others accounts so far have been successful in the majority of the cases. The credit for developing this extension goes to a Seattle based software engineer named Eric Butler.

Firesheep can also target blogging services. The extension is quite customizable and veteran hackers can make it even more lethal by adding the capability of targeting more websites than what is listed in its database. The extension points out the vulnerability of using wireless networks once more. However, the corporate users using VPN are on the safer side as security experts have said. The applications functions as a capable packet sniffer. It detects unencrypted data traffic between a set of PCs and the Wifi router they are linked to.

Firesheep has generated massive interest among the general users and hacking community alike after its release. The vulnerability exploited by this plug in is not new. In fact it has been highlighted recently.