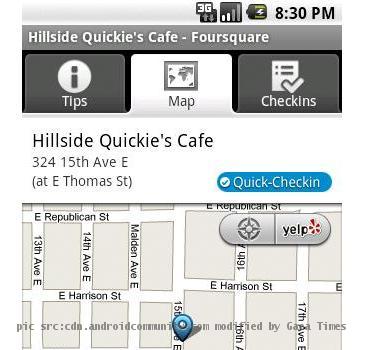 FourSquare the popular Android service has passed yet another milestone. The userbase of this service has swollen upto 5 million users. IT has managed to show an astounding growth by almost 10 times in the past nine months.

Co-Founder and CEO of FourSquare, Denis Crowley revealed the data on stage of the LeWeb conference. the Geosocial service passed the magic number last week. It passed the 1 million mark only last April. The report however is based on the number of user id’s that has been registered and not the actual number of users. Speaking on this matter Foursquare said

Though there are over 5 million user IDs in the foursquare community, our user IDs don’t necessarily match up to our actual number of user accounts. That said, we do expect to hit 5 million next week.

On being grilled by LeWeb and Seesmic on the rumors of acquisition by Facebook doing the rounds Dennis Crowley confirmed that Facebook and another party made an offer of $140 million.

New web app stops you from tweeting, Facebooking if you are too drunk!

LONDON - Many of us have some or the other time, woken up to the horrible realization of having post...

Software to stop you writing e-mails when drunk

LONDON - A new software can now stop you writing e-mails or posting messages when you are drunk. ...

Much to a lot of people's interest, the real-world location-based game SCVNGR is indeed going gl...

Putting holiday plans on Facebook, an open invitation to burglars

NEW YORK (GaeaTimes.com) -- Business Networking is going to get smarter as location based app Un...

Employees prefer sex to LinkedIn to get ahead at work: Study

WASHINGTON - A new US poll has suggested that employees prefer using sex to get ahead at work th...

"Super X-Ray Vision" is the Future of the Loopt

NEW YORK (GaeaTimes.com) -- When it comes to location based service industry, names like Foursqu...

Facebook Gets Patents for the Inventions of Foursquare and Gowalla - What?

NEW YORK -- The war among the Location based industry may have been started quite sometime a...

Can I buy you a drink ... on Facebook? Bartab makes it happen for just 2 bucks