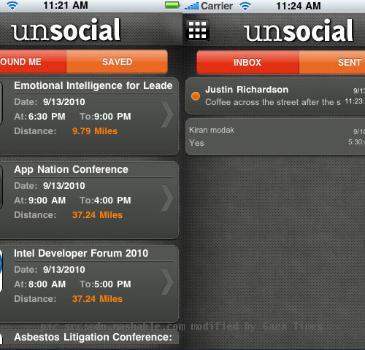 NEW YORK (GaeaTimes.com) — Business Networking is going to get smarter as location based app Unsocial peeks into the arena. Unsocial hauls itself as the meeting point of LinkedIn and Foursquare. It tends to get you in touch with your nearest business network. Basically, it is a mobile app that will cater to a smarter way of business networking.

LinkedIn, one of the biggest Business Networking site and Foursquare, a location based service will come together in this app to help you find out your nearest business networks. You are more likely to meet with people you don’t know.

The Beta version of Unsocial launched today at the DiscoveryBeat conference at San Francisco. For the moment, the app has been released for iPhone and Android based phones, but soon Blackberry and HTML5 will be included. Although the app is available to users of San Francisco right now, but more cities will be added very soon.

We think that this app can be the next generation arena to Local Business Networking. The most important aspect that it holds is that newly arrived Businessmen can now get a hold much earlier than before.

CHANDIGARH - An Indian Army operation to dispose off 17,000 pieces of scrap ammunition of unknown or...

SHIMLA - The higher reaches of Himachal Pradesh may experience more spells of snow, the weather offi...

Find 120 hidden gems in 12 locations. Each location contains 10 hidden gems. You can submit your sco...

MUMBAI - The Environment and Forest Ministry on Monday gave fullclearance for the constructi...