RIM BlackPad Tablet to be Launched Next Week? 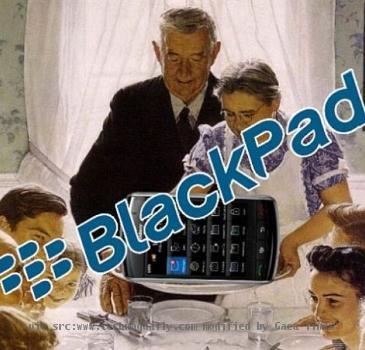 LOS ANGELES (GaeaTimes.com) — Rumors are flooding in the web that RIM’s challenge to Apple iPad is on its way to launch. The speculation is that Research in Motion Ltd will unveil its own tablet device named BlackPad on the next week.

Reportedly, the BlackPad will not be running the new BlackBerry 6 operating system. The new unit will be equipped with two built-in cameras and a 7 inch touchscreen. The size of the device will be same as Galaxy Tab from Samsung Electronics, which is slated to be launched in November this year. That implies the BlackPad will be 30% smaller in size than the 11-inch Apple iPad.

According to RIM official, their strategy was to make a smaller screen tablet that looks like a mobile rather a simply portable one.

The BlackPad will have both Bluetooth and broadband connectivity. But the device will connect to cellular networks only via a BlackBerry smartphone.

TORONTO - With co-CEO Jim Balsillie Wednesday announcing that the company's PlayBook tablet will be ...

BlackBerry PlayBook to Sell for Under $500

Here's some great news for the BlackBerry Playbook freaks! - As RIM Co-CEO Jim Balsillie has rev...
Copyright© 2010 The Gaea Times