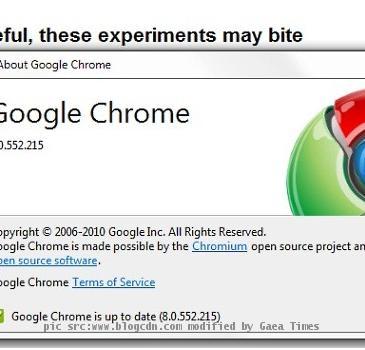 SAN FRANCISCO (GaeaTimes.com)- The Internet search giant Google released version 8 of its popular web browser Chrome. The browser, which took the browser market by storm since its inception two years back, is now available in stable 8th version and in this release Google has added a plethora of new features. The biggest addition is probably the inclusion of a PDF viewer. That means from now onwards the Chrome users would not have to install a third party PDF software in their PCS to view and share PDF documents. This PDF viewer runs in sandbox mode so that no rogue PDF file can compromise the security of the system.

Google has reportedly fixed a lot of bugs that haunted users of the previous versions of chrome browser. The patches are meant for all platforms. The Chrome users can update their versions of Chrome and even if they do not, their PCs will automatically receive the update for version 8. Google says that it is faster than the previous versions and the users with slower connections will be able to feel the difference after using the new stable version. As a matter of fact, Chrome became popular fast among the web users owing to its minimal interface and unmatched speed. Since then Chrome has gradually increased its market share and Microsoft whose IE is still the leading browser has seen its share diminishing gradually.

Chrome 8 is likely to woo more users with its compelling new features. The look of the browser is not much different compared with the earlier versions. However, it will not be long before the version 9 gets ready for release, according to Google.

SAN FRANCISCO (GaeaTimes.com)- There is no denying the fact that the world wide web which has ch...