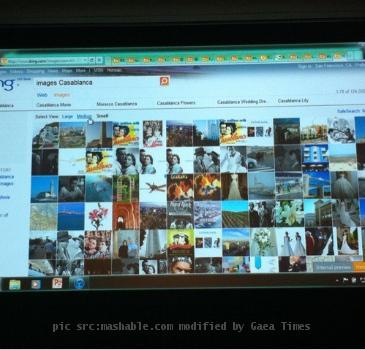 Microsoft is not letting go of the title for Web Supremacy to Google without a fight. In order to revive user interest in its popular search engine Bing Microsoft has managed to launch an overhauled image search feature quite like Google had done earlier this year. The redesigned product was unveiled at the Bing Search Summit at San Fransisco. The roll out has been completed earlier in the morning.

The Bing image search will now be utilizing a grid format to display the images side by side. There will be options to choose the image size starting from small, medium and big. The large format will also contain meta data on the image. Another Feature is that Bing will be breaking down the search query of the user in order to provide more relevant results. The new feature is being called the “Smart Tabs”.

Google’s revamp was introduced in July by Marissa Mayer back in July. That overhaul included the removal of the Google Images frames and the Image Search Ads. Bing is closing in on its rival at least for the moment.

WASHINGTON - A new study has found that adolescents into binge drinking are more likely to engage in...

LONDON - New research suggests that middle-aged women who enjoy a couple of glasses of wine a day ha...

WASHINGTON - Researchers have warned that binge-drinking teenagers are more likely to have mood diso...

After 15 years, I binged on junk food for 'Guzaarish': Hrithik Roshan (Interview)

MUMBAI - Hrithik Roshan, known as a hot bod of Indian showbiz for whom staying away from junk food i...

LONDON - Teenagers who text 120 times a day are nearly three-and-a-half times more likely to have se...

How many of you installed a software only to find that your default search engine has been chang...

Google has come up with a mobile search application specifically targeted towards the Microsoft'...
Copyright© 2010 The Gaea Times