Google Chrome for Linux and Extension 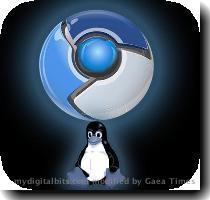 Just a day after announcing its plans for launching real-time search, Google released beta version of its web browser Chrome for Linux platform. Obviously, if not for all, it’s a consolation for Googleplex engineers using Linux machines. They must have been craving for Google Chrome for Linux. The Chrome beta for Linux seems to be as good as the version for Windows. In addition, Goolge continues its effort to make things easier for users by customizing the browser with extensions. Google Chrome extensions are uniquely build to run in its own process in order to avoid crashing or slowing down of browser.  It is fast, stable, extensible and quite secure. It has strong integration with native GTK themes updates that are managed by the standard system package manager. Several other features would come natively incorporated in the operating system. It embraces open standards such as HTML5.
Chrome works well with both Genome and KDE and its updated via normal system package manager. Chrome has also been developed as a true open source project using public mailing lists, IRC channels, bug tracker, code repository and continious build and test farm that follows a trail blazed by Mozilla. We had noticed problems in system libraries.

According to Chromium blog

Goolge Chrome works well with both Gnome and KDE, and is updated via the normal system package manager. It has also been developed as a true open source project, using public mailing lists, IRC channels, bug tracker, code repository, and continuous build and test farm - following in large part the trail blazed by Mozilla.

It’s easy to install the Linux version of Chrome is straightforward 32-bit and 64-bit packages are available for Debian GNU/Linux, Ubuntu, openSUSE and Fedora. Some of you might be experimenting with the dev channel version of Chrome prior to the release of this beta. Now you need to uninstall the unstable version and install the beta.

Linux users can provide feedback for the beta release here.