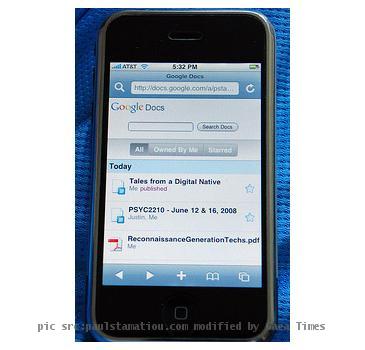 Those who missed Google Docs on their Smart Phones, good news for them. Google is now rolling out a mobile version of its much popular cloud-based Docs platform. So, nw you have the liberty to edit and update all your documents on the go, and most importantly other’s in your network who share the doc can get hold of the updates. Now, that’s something great for the businessmen isn’t it?

Well, as quite expected out of Google, Mobile Docs will be supporting Android 2.2 (Froyo) smartphones, along with a vivid-range of other operating systems including Apple iOS (version 3.0+).

As it is English happens to be the only supported language at the present, that’s wont pose to be big an issue because the others are already queued up to be added over the next few months.

Using Mobile Docs is actually pretty simple just like in your pc, visit docs.google.com in a browser on a supported device and select the document you want to edit. Then, when you’re viewing it, press the “Edit” button to switch to the mobile editor.

Well the video below will surely deliver you with the solutions to all your queries.