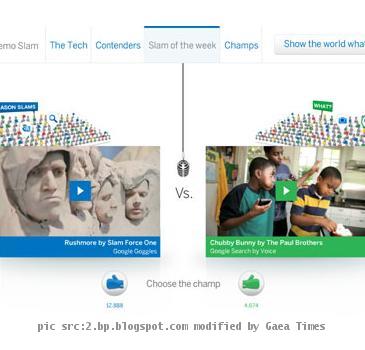 The theme for today’s Google Homepage is the promotion of Demo Slam. For those not in the loop it is a site which allows filmmakers to show of their recent techniques and also compete against other would be film makers.

The site was given a very soft launch without much publicity a month ago. Google describes the marketing effort as

We spend our time making a whole bunch of technologies that are free for the world, but a lot of people don’t know about them. And that kind of sucks. So, we thought organizing the world’s most creative tech demo battle would be a great way to help spread the word and teach people about tech. Not to mention, it’s a lot of fun.

Aspiring filmmakers are free to submit their videos on youtube in order to get entry to Demo Slam. If the video gathers up the hits then it will be featured as the slam of the week as a contender. Interestingly a video that pits Google Search (Google search) and Voice against Google Goggles. It really strange and amazing that one of the groups manage to snag Maria Sharapova to star in the film. The one about Google fools the Google Goggles to think that a paper model is actually Mount Rushmore.