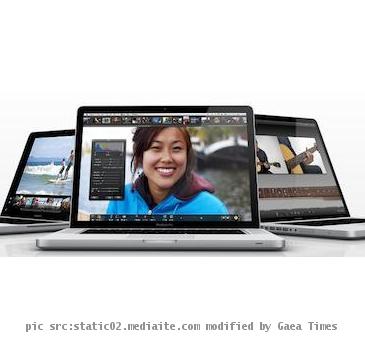 DELHI, INDIA (GaeaTimes.com)- Apple introduced the first generation MacBook Air two years ago and despite the hullaballo surrounding it the light weight laptop drew a lot of flaks. It was incredibly light for sure and had stylish looks as well. However, a sole USB port, lack of Ethernet and the steep price were its major drawbacks. With the new lineup of MacBook Air models, Apple has overcome many of the limitations and the new lineup has also been launched in India. The new models come in two size- 11 inch and 13 inch.

The new Macbook Air models do resemble the iPad at first glance. As always Apple hits the bull’s eye as far as the elegance and simplicity of design is concerned. The thinnest part of the laptop is just 3 mm and the thickest part is only 1.7 cm. That obviously makes it thinner than any other ultra portable available in the market. It can easily be held similar to a file folder by the users. The 11 inch model comes with a couple of USB ports. On the left side there is a headphone jack. With the mini Display port connector the users can hook it up to an external display. However, apple has not included the Ethernet port and this can be troublesome for some users.

The new MacBook Air also lacks an optical drive. This is necessary to maintain the figure zero proportions. On the brighter side the new model uses SSD instead of slower rotational hard drive. That means there is less application load time or OS boot time. The keyboard is easy to use as well.

ISLAMABAD - Despite stiff opposition from allied parties and the opposition, the Pakistan government...

NEW DELHI - Transgenders are at a higher risk of contracting HIV infection, said a UN report on AIDS...

GUANGZHOU - A shocking defensive lapse in the dying minutes of regulation time resulted in a heartbr...

NEW DELHI - To check fraud, the Municipal Corporation of Delhi (MCD) will no longer courier birth an...